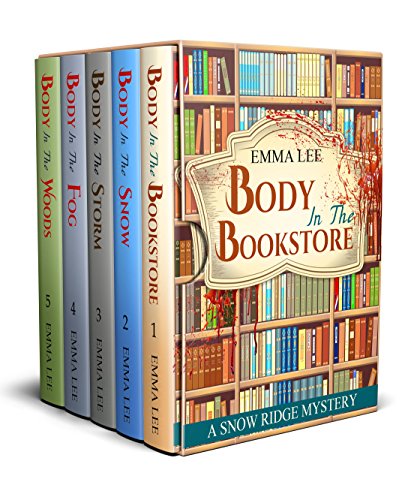 Get ALL 5 books from Emma Lee's popular series in one big box set! AND at a discounted price!

Book 1:
After her painful and heartbreaking divorce, Bonnie Mayberry thought her life was over. The numbness, the disbelief in what had happened and the fear of what would come next ensured that her every thought was tinged with doubt.

Hoping for a fresh start, she’s packed up, said her goodbyes and moved to the small town of Snow Ridge, New Hampshire. Settling down in an old, renovated farmhouse, she plans to focus on the simple things in life. And, in time, she is determined to get back to some semblance of normalcy.

But, apparently, that is not going to happen any time soon…

The young girl at the local bookstore Bonnie frequents has been murdered. She was one of the few with whom Bonnie has become friendly during her short time in town. And whether it’s her mysterious past, her reserved nature or simply the relative ease in pinning the blame on the outsider, the police have Bonnie at the top of their list of suspects.

Now, if she wishes to avoid a prison sentence for a crime she didn’t commit, it appears as if Bonnie is going to have to prove her own innocence. In doing so, she’ll uncover a crooked politician, unveil a hidden monster and unearth a web of secrets & lies that certain residents of the town have spent their lives concealing. And, with a little luck, she may just survive long enough to clear her good name.

Book 2:
Just when Bonnie Mayberry thought her new life in Snow Ridge was getting back to normal after a horrific case involving a deadly, old man bent on revenge, she is pulled into a second case that wraps her in a web of lies, deceit and...murder!

At first, the man’s murder seems straightforward enough. That is, until an influential politician arrives in town demanding that the wife of the dead man be turned over to her for prosecution. But Bonnie soon finds out that this powerful woman is not exactly who she seems to be…

In fact, she may not only be the killer, but she just may be planning to take over the world!

Book 3:
When Bonnie agrees to help locate a missing girl, Bonnie leaves her hometown of Snow Ridge, New Hampshire and hits the road on a mission to track her down. But when false leads and countless mishaps have her traveling up & down the East Coast and mingling with a cast of characters ranging from the Amish to the FBI, she begins to doubt her chances at success. That is, until she finds the girl on a dark & stormy night.

And that’s when things really start to get messy…

Book 4:
After traveling up and down the East Coast in search of a missing girl, Bonnie Mayberry couldn’t be happier to return to normal, everyday life. But, as one case closes, another opens…

It begins when a bounty hunter arrives in town just as a heavy fog begins to descend upon Snow Ridge. His tale of a murderous clown, a maniacal banker and a promise to a dying woman seems to be as murky as the misty air. But, as always, Bonnie is determined to help solve the mystery and, despite the danger from thickening fog, she soon finds herself on the road once again.

Only, this time, she’s running for her life…

Book 5:
Just when life is returning to what Bonnie considers her “new normal”, she receives a call from an old friend in need. Never one to turn down a request for help, she soon finds herself in a small Georgia town that has her feeling like she’s stepped back in time. But there’s little time to reminisce.

With the help of her best friend, Sarah, and a stolid local lawman, she falls into a case concerning an abandoned baby, a missing mother and…murder! And this one has her questioning everything she thought she knew about herself.

GET YOUR COPY TODAY!
Libros Relacionados