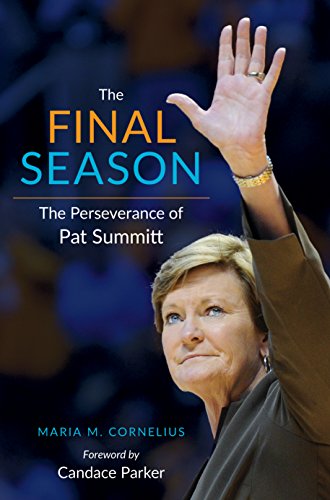 With 1,098 wins and eight national championships, Lady Vol Coach Pat Summitt has left a remarkable legacy of perseverance, leadership, and passion for the game—but her victories on the court aren’t the only legacy she has left in her wake.

Since the beginning of her career as Lady Vol head coach at twenty-two years old, Pat Head Summitt effectively established the University of Tennessee Lady Vols as the top women’s athletics program in the nation. The winningest coach in the history of NCAA basketball, Summitt overcame one obstacle after another on the road to every victory, but it is the lives she has impacted along the way that tell the story of her true legacy. Forever a role model for young women, expecting nothing but the best from her players and from those around her, her legacy has never faltered—not even during her final season as head coach, when she faced her fiercest adversary yet: the diagnosis of early-onset Alzheimer’s disease.

In The Final Season: The Perseverance of Pat Summitt, Maria M. Cornelius tells the story of her final coaching season through the eyes of those who know her best, from players to support staff to Summitt’s closest friends and advisors. Beginning with the diagnosis that shook the Tennessee community in the summer of 2011 and continuing through to the final game of the 2011–12 season, The Final Season presents readers with a behind-the-scenes look at the conclusion of Summitt’s coaching career, detailing from the perspective of a sports writer how her diagnosis impacted her players and her staff as well as her fans.

With forewords by former Lady Vol Candace Parker and Swish Appeal editor Mike Robinson, The Final Season reveals how Summitt’s remarkable story of perseverance not only united a team of young women but also brought an entire sports following together, revealing an incredible support system that spanned far beyond Summitt’s Tennessee community. The coach’s determined spirit, selfless love, and sense of humor shine through the pages of Cornelius’s book, painting for readers the picture of a beloved leader and detailing the personal moments of defeat and triumph that make Summitt a true champion.