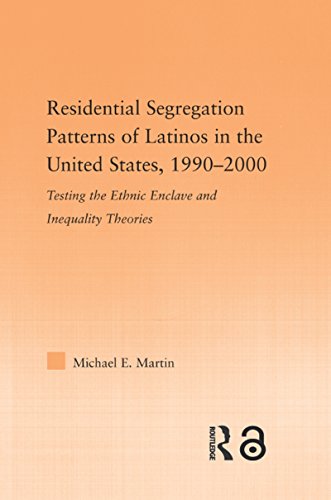 Historically, residential segregation of Latinos has generally been seen as a result of immigration and the process of self-segregation into ethnic enclaves. The only theoretical exception to ethnic enclave Latino segregation has been the structural inequality related to Latinos that have a high degree of African ancestry. This study of the 331 metropolitan area in the United States between 1990 and 2000 shows that Latinos are facing structural inequalities outside of the degree of African ancestry. The results of the author's research suggest that Latino segregation is due to the mobility of Latinos and structural barriers in wealth creation due to limited housing equity and limited occupational mobility. In addition, Latino suburbanization appears to be a segregation force rather than an integration force. This study also shows that Mexicans, Puerto Ricans and Cubans have different experiences with residential segregation. Residential segregation of Cubans does not appear to be a problem in the U.S. Puerto Ricans continue to be the most segregated Latino sub-group and inequality is a large factor in Puerto Rican segregation. A more in-depth analysis reveals that the Puerto Rican experience is bifurcated between the older highly segregated enclaves where inequality is a large problem and new enclaves where inequality and segregation are not an issue. The Mexican residential segregation experience reflects that immigration and mobility are important factors but previous theorists have underestimated the barriers Mexicans face in obtaining generational wealth and moving from the ethnic enclave into the American mainstream.